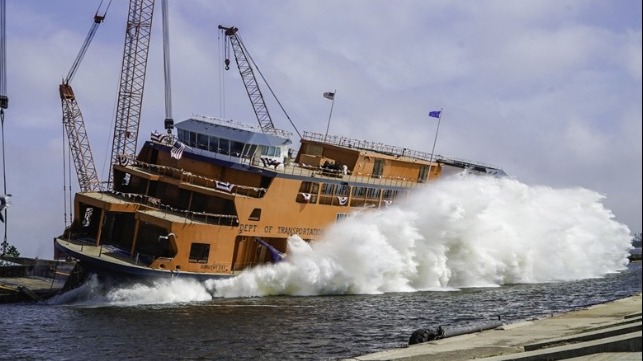 On the 31st of March 2021, congresswoman Nicole Malliotakis had the honor of breaking the ceremonial champagne over the bow of the Dorothy Day. The vessel was launched by the New York City Department of Transportation (DOT) and was a part of a $300 million investment to bring advanced ferries to Staten Island and lower Manhattan. The project was to include three new state-of-the-art ferries to the fleet, which had not been updated since 2006.

Malliotakis, who represents the Eleventh Congressional District known as Staten Island, noted how crucial these new ferries will be to Staten Island residents. At the launch she quoted that “For more than 200 years, the Staten Island Ferry has been a symbol of New York City’s harbor and an integral part of our city’s transportation system.”

Dorothy Day was the third to be built by a corporation known as the Eastern Shipbuilding in the “Ollis Class.” The designs of the ships were by the Elliot Bay Design Group located in Seattle Washington. The ferries all share a double-ended traditional New York design featuring the traditional orange color seen on NYC ferries. All three ships should be able to operate in extreme weather conditions and use modern maritime technology. Some examples of these new advancements include phone charging outlets and an upper-deck promenade.

The vessels are designed with the most efficient and clean public transportation options available and can move up to 4,500 people. In addition, the ships will be equipped with the newest generation of advanced technology diesel engines. According to the Executive Director of Diesel Technology Forum (DTF), these engines will produce near-zero emissions.

The first boat scheduled to make an appearance in the New York harbor will be the Staff Sergeant Michael H. Ollis. After extensive preparation and staff training, it’s projected to begin services in November 2021. The second boat, the Sandy Ground, is expected to begin regular passenger service by 2022. The last of the three, the Dorothy Day, will arrive in New York by the end of 2022.

These new maritime advancements are always exciting for the city of New York. However, it’s important to note that with new ferries will mean a higher influx of ferry-related accidents. Issues such as poor maintenance or an inattentive captain could put passengers at risk for a serious injury. If you’ve been injured in a ferry or boating accident, contact our New York maritime attorneys at Anderson Carey Williams & Neidzwski, PLLC.

Call 1 (800) 262-8529 to set up your first consultation with an experienced NYC maritime attorney today. Our law firm accepts cases all throughout the state of Washington, Oregon, California, Connecticut, Alaska, and throughout the U.S.